In a series of spontaneous Christmas morning events that have taken place across the country, combatants from both sides of the War on Christmas have laid down their arms and ventured out of their trenches into no-man’s-land, where they met their enemies face to face and interrupted the slaughter.

Apparently the Christmas holiday evoked a sense of nostalgia for family and good neighborliness, and found weary fighters sharing cups of hot cocoa and family snapshots with their enemies in the contested hallways and food courts of shopping malls across the U.S.

A century ago, in 1914, a similar Christmas day truce took place on the battlefields of World War I. General Fitz

gerald A. Grinch, who commands the U.S. forces pressing the War on Christmas in the King of Prussia Mall in Pennsylvania, described the scene with tears in his eyes.

“I’ve never seen anything like this in all the many wars I’ve been in,” Grinch told reporters. “I mean, we will never give up in our national War on Christmas, but just for today, to stop the carnage and the killing for even a few hours, because, I mean, hey, after all, it’s Christmas… it’s inspiring.”

Even Starbucks stores got in on the one-day truce. Green beret baristas who’ve been ardently attacking Christmas on behalf of our nation were seen, for the first time, speaking with pro-Christmas guerrillas, and even handing out free samples. Mall Santas came out from their dug-in positions in Hobby Lobby stores to share an Auntie Annie’s pretzel or two with enemy troops from elite Happy Holidays commando units.

Tomorrow, our nation will resume its fight against the tyranny of Christmas, with Starbucks leading the charge. But for a few hours today, everyone’s common humanity is rising above it all, because Christmas.

This was a short piece my wife, Melissa Crabbe, and I co-authored back in early 2008, just a few months after our newly adopted kids had arrived. 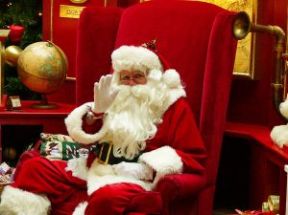 It’s based on actual events. A version of this story appeared that year in Jewish Currents magazine. Melissa and I wrote the piece together even though it is in first person singular in my voice.

I remember the first time I was in the mall in early December with our newly adopted children, Hunter and Clarice, ages 5 and 7. After years in foster care, they had come to us eight months earlier. Overnight they went from never having known any Jews to becoming a rabbi’s kids. And though they had already come to think of our synagogue as a second home, there were still things from their former life that they found comforting, things my wife and I hadn’t quite decided how to handle. Like mall Santa.

The kids spotted him as we walked past the cinema. Suddenly I was a rabbi whose kids wanted to sit on Santa’s lap.

We had already talked to them about how we don’t celebrate Christmas, and they had seemingly accepted that. They were intrigued by “Hanukkah Harry” who, we said, brought Jewish kids Hanukkah gifts and belonged to the same union as Santa.

“How does he get the presents to all the kids at Hanukkah?” my daughter had asked.
END_OF_DOCUMENT_TOKEN_TO_BE_REPLACED

You may have noticed recent news stories describing the latest salvo in our nation’s ongoing War on Christmas – Starbucks Corp has been enlisted to de-Santa-fy its Christmas themed red/green holiday season beverage containers, and has launched a shock and awe campaign designed to place nothing but plain red cups with green trim into the hands of tens of millions of customers. As the War on Christmas enters its second decade, I fear this latest attempt to turn the tide in this ill-conceived war is doomed to fail before it even begins.

What concerns me most is that we should have won this war long ago, but we went in without enough troops, and the illegal POW camp we set up at the North Pole betrayed our values and weakened our international credibility. Too many politicians and war profiteers have lied us into this quagmire of an endless and unfinished war on Christmas.

And our traumatized troops, when they come home, what do we give them? Jobs and trauma support? No! We give them shopping malls filled with so called holiday music and decorations. But these brave men and women who’ve faced the wrath of Santa’s terrorist elves, they KNOW this holiday stuff is really just Christmas stuff in disguise.

We should either have gone into the war on Christmas with overwhelming force and the will to win decisively, or we shouldn’t have gone in at all.

At best we’ll leave the North Pole in a leaderless mess. I know that Santa is a brutal tyrant, and that the people of the Arctic circle deserve freedom, but even if we did oust him, what kind of crazies might take over there? Everyone knows you should never get into a land war in the Arctic. Even Putin wasn’t dumb enough to make that mistake, and he’s got Siberian trained cold weather shock troops. You know who is really the winner of this endless war? The weapons manufacturers, as always. The war on Christmas will be remembered as the great foreign policy debacle of the American 21st century.