One of these is an actual quote from the Torah, and one is not. Can you guess which is which? 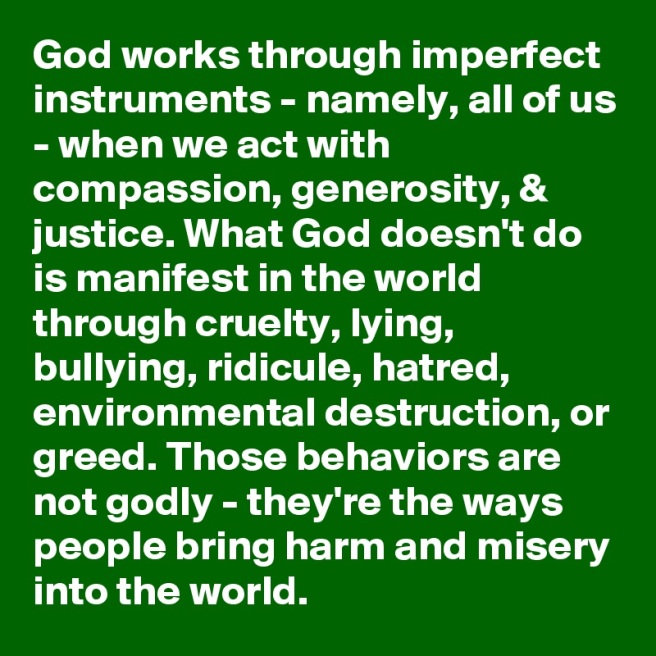 Maybe it would look something like this series of tweets, beginning with his responses to the mass shootings that took place in El Paso and Dayton: 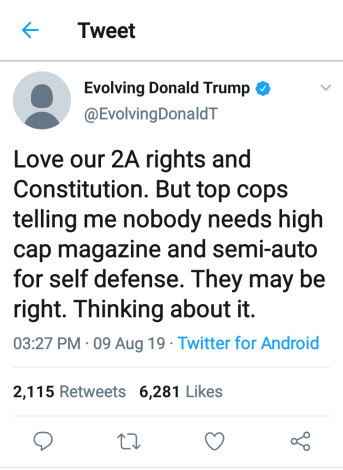 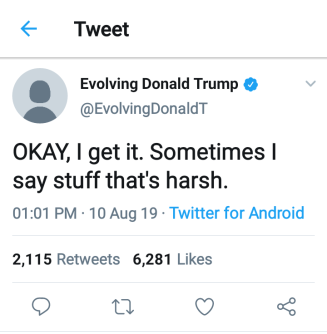 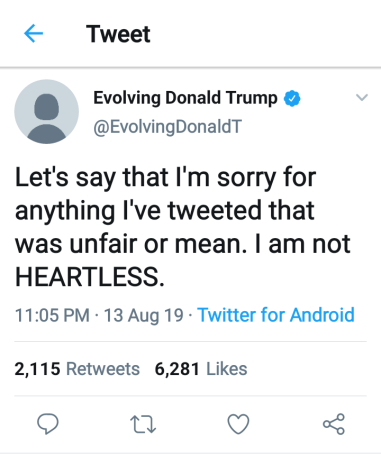 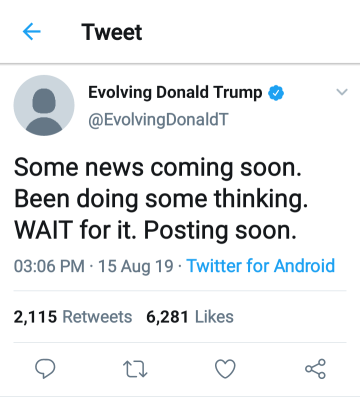 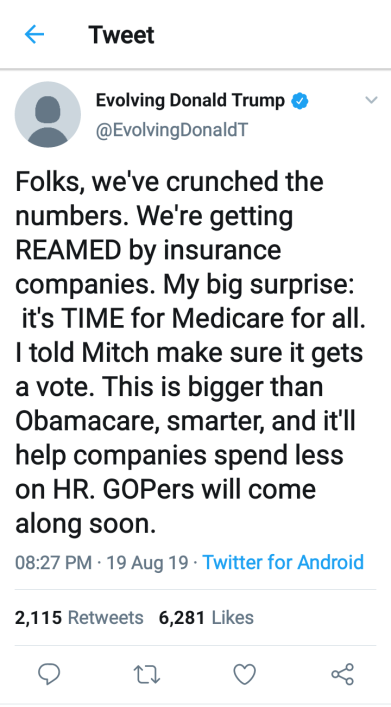 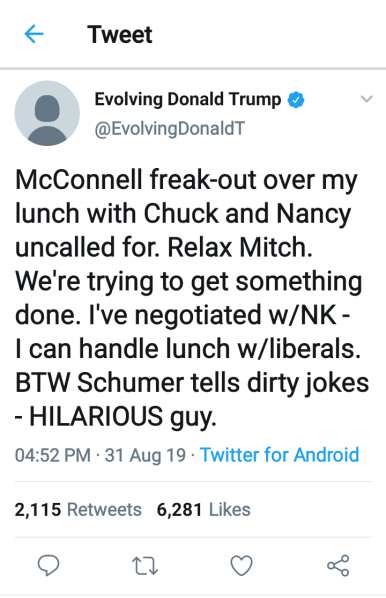 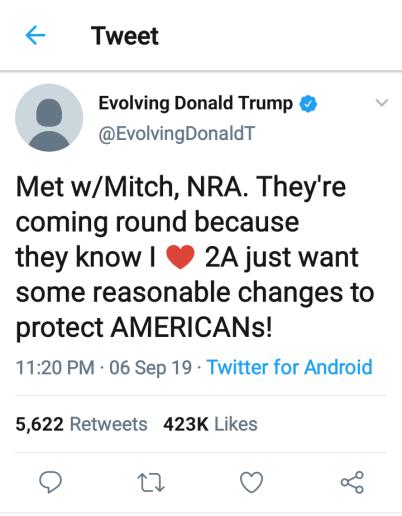 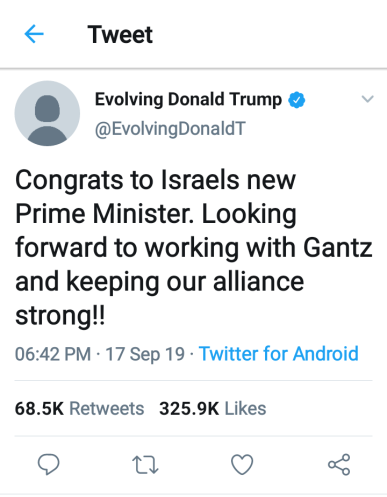 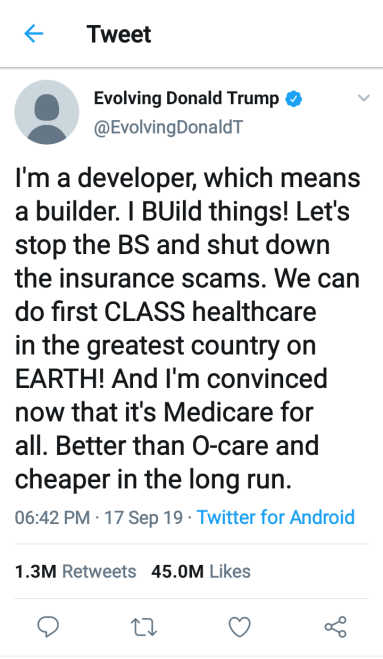 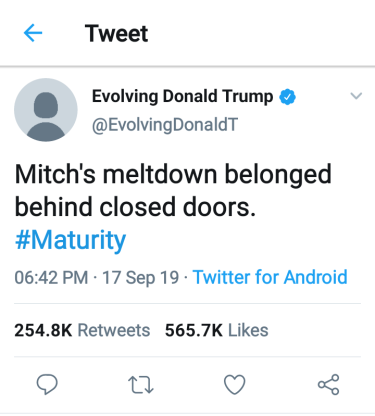 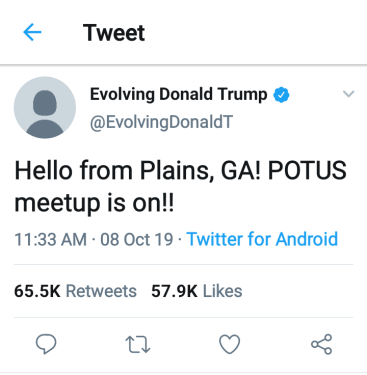 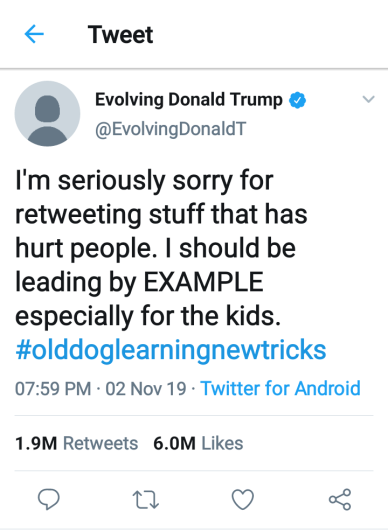 We know now who the parties will be that will contest the do-over election that’s set for mid-September. In April, Netanyahu’s ruling Likud party won 35 of the 120 Knesset seats, and tied the newly formed centrist party, Blue and White, co-led by Benny Gantz and Yair Lapid. But because the right wing parties tallied 65 seats total in the last election, Likud was given the opportunity to try to form a government. To do that, you need a coalition of parties with a minimum of 61 seats, and you have 42 days to get it done, or else the (largely ceremonial) President of Israel can choose another party to try to form a government.

If you remember, Bibi was able to get a coalition of 60 seats, but one of the right-wing parties, Yisrael Beiteinu, headed by Avigdor Lieberman, refused to join the Netanyahu led government. They won 5 seats. The stated reason Lieberman gave for holding out was his ideological determination to insist on several laws that would discontinue military service exemptions for ultra-orthodox yeshiva students. Lieberman’s party is an avowedly secular, xenophobic, Jewish nationalist, pro-settler party. Few people thought he would actually hold out for the full 42 day coalition-building period – everyone thought he was taking a severe bargaining position. But he did.

Before the Israeli President could pivot and offer Blue and White a chance to have 42 days to form a government, Likud called the Knesset into session and called for a vote to form and then immediately dissolve the legislature. This was unprecedented, and it was weird. The reason Likud did this was that they preferred a second election in a few months’ time to giving Gantz and Lapid a chance to form a coalition.

So here we are.

One of the things that has happened since then is that there’s been a lot of small parties combining into blocs. So only 9 parties will be on the ballot in the upcoming election, the smallest number in Israel’s history. The Arab parties, which ran three different slates in the last election, have formed a Joint List (when they’ve done this in years past, they’ve tended to get more seats). Blue and White, which came closer than most expected to toppling Likud in April, has been laying low, and now, as they launch their new heavy PR push, they’re having in-fighting problems that are generating bad press for them. Lovely.

Meretz, traditionally the party of the peace camp, has merged with a newly formed party announced by former Prime Minister Ehud Barak, calling itself the Democratic Union. On the right, some of the smaller parties have formed Hayamin Hachadash – “The New Right.” There’s some super creepy folks in that cohort, let me tell you.

Below is a graphic I pulled off of a webinar that shows, in the center column, the names of the 9 parties (or slates) that will be on the ballot. The column on the right shows how many seats each of these slates won in April – only because some of these slates were divided into smaller, separate slates last time, what the makers of this chart have done is combined the totals that smaller parties got last time when appropriate.

So what do we make of this chart?