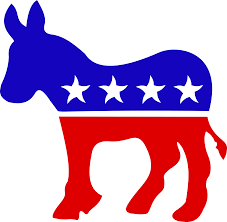 My dear fellow Americans who don’t know the truth about who we Democrats are and what we believe: there’s a lot of nonsense being said about us, so I just wanted to set the record straight on a few things.

It seems like Trump and the rest of the Republican leadership are hellbent on telling the public that Democrats are sickening, evil people who love late term abortions, want open borders, hate Christians, and want to impose socialism on the country. So, here’s the thing: all of this is wrong. Here’s what Democrats actually believe about these particular issues: END_OF_DOCUMENT_TOKEN_TO_BE_REPLACED

I think this says it all.

(The rest of this post is a direct quote from the interview – a link to the full interview follows.)

Q. This coming Saturday, July 20, Binyamin Netanyahu will have served as prime minister of Israel longer than David Ben Gurion: 13 years and 128 days, to be exact. Can you compare the two?

A. Frankly, no comparison really works here. Ben Gurion renewed Jewish sovereignty for the first time in nearly 2000 years. He made incredibly daring and difficult decisions in order to bring this about: the very declaration of Israeli independence against all the odds; Altalena and the determined creation of a single sovereign armed force; prioritizing mass Aliyah over the military’s budget; accepting German reparations; creating a nuclear project. Nothing that came after can compare.

Netanyahu’s longevity in office contrasts particularly with Ben Gurion precisely because Netanyahu has consciously avoided making hard decisions while seemingly letting time and circumstances take care of the challenges involved. Ben Gurion would have acted–confronted the settlers, for example, whatever the cost–to prevent Israel from becoming a binational entity. By the same token, Ben Gurion might have adopted a far more aggressive military pose vis-à-vis Iran in Syria–not necessarily the wisest move.

At the socio-economic level Ben Gurion, who successfully imposed upon beleaguered and bankrupt Israel the absorption of hundreds of thousands of Eastern Jews and Holocaust survivors by a state-run, centralized economy, would never have acquiesced in the huge income gaps and social fragmentation that have emerged in Israel’s otherwise successful market economy under Netanyahu.

Netanyahu is as distant from Ben Gurion as any Israeli prime minister. Only his impressive political skills place him in the Ben Gurion class. Yet Netanyahu uses those skills basically to stay in office–

Netanyahu is essentially a status quo politician, more like Yitzhak Shamir than any other predecessor. Menachem Begin pro-actively sought peace with Egypt, Yitzhak Rabin with the Palestinians and Jordan. Ariel Sharon withdrew from the Gaza Strip. In all cases, these leaders consciously challenged a skeptical public and a hostile political reality. They behaved in the Ben Gurion mode. Bibi meets secretly with Arab leaders and openly with Putin and Xi, but only with the goal of maintaining Israel’s physical security while doing nothing about the existential Palestinian demographic threat closer to home. Bibi also has Trump–a problematic asset but nonetheless a luxury Ben Gurion never dreamed of enjoying as he navigated the fortunes of a truly isolated country. 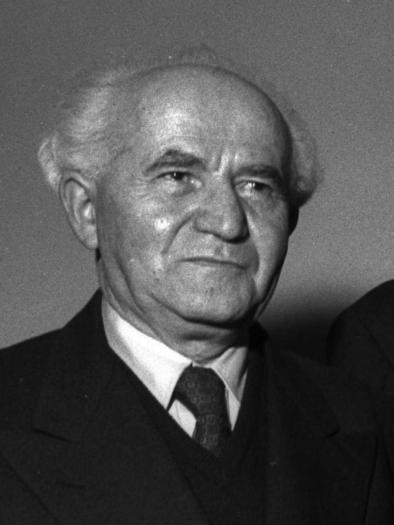 Incidentally, Ben Gurion also confronted corruption allegations–spending government and Histadrut money for his book collection and even his Tel Aviv home. He ignored or rebuffed the charges easily. One thing that has changed for the better since then is the rule of law, though that too is now being challenged by Netanyahu.

Netanyahu is as distant from Ben Gurion as any Israeli prime minister. Only his impressive political skills place him in the Ben Gurion class. Yet Netanyahu uses those skills basically to stay in office–currently, as a means of avoiding prosecution on corruption charges. Ben Gurion applied his political skills toward realizing his daring vision for Israel. When necessary, he left office precisely to advance his goals. Can anyone imagine Netanyahu doing this?

He came into office with a bold vision and a cocky style, determined to win the hearts and minds of the entire organization and build a base of support that would allow him to hold the office of Employee Of The Month (EOTM) for years to come. Few wanted to get in his way – this talented Jewish juggernaut from Missouri with the knit kippot and delicate hands (do NOT say they’re small around him, btw.)

But now Harris’ “Camelot” has come crashing down, following weeks of allegations of mismanagement, and then a cascade of scandals that left people in the Comms department chanting “Lock him up!” and the Development team refusing to accept his donation to the staff’s annual gift to the institution.

There are many contributing factors to Harris’ abrupt downfall and failure to garner even a second monthly term as EOTM, but most analysts agree that it was his barrage of self-aggrandizing lies and the investigative journalists who exposed them that finally sunk him.

Did he actually summit Denali at age 45? It turns out no, as the Philly Inquirer discovered.

Is he actually married to the glamorous and brilliant prison-education expert, Melissa Crabbe? Have you ever actually seen her in the same room with him?

Are the Hot Pockets he stockpiles in the fridge actually vegan? They’re actually not even ingredient kosher.

Perhaps worst of all were the lies about his dating life. 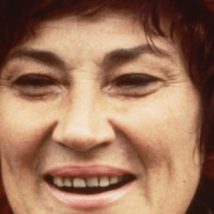 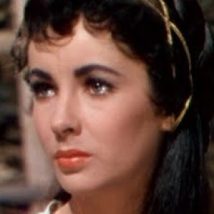 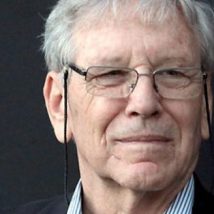 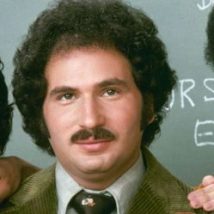 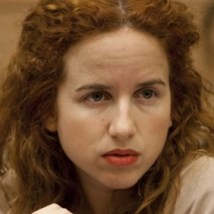 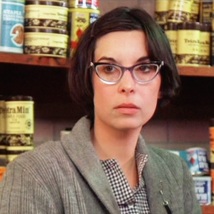 It was Bryan Schwartzman of the Comms department, pursuing his own investigative leads, who uncovered Harris’ series of false boasts about celebrities he had dated. In venues such as the annual meeting of the Conference of Presidents of Major Jewish Organizations, Harris told notable Jewish leaders that he had been lovers with a remarkable list of people, including Bella Abzug, Elizabeth Taylor, Amos Oz, Gabe Kaplan (while he was playing Mr. Kotter), Stav Shaffir, and Talia Shire (while she was playing Adrian in Rocky). Had Harris limited his claims to people who are currently deceased, he may have been impossible to prove wrong. As it stands, he now faces libel lawsuits in 3 countries from Shaffir, Shire, and the estate of Oz. Alan Dershowitz has agreed to represent him.

In a desperate last act intended to win back his collapsing support, Harris spent forty times the EOTM budget to hire a professional meme creator to produce this “Recon rabbis are the sexiest…” eye-chart-style poster. These mammoth 4 foot x 6 foot posters were delivered to each employee and to all their known relatives. Needless to say, the tactic did not work, and the new EOTM, Hila Ratzabi, comes into office having to deal with the residual effects of the debt this expenditure has created. 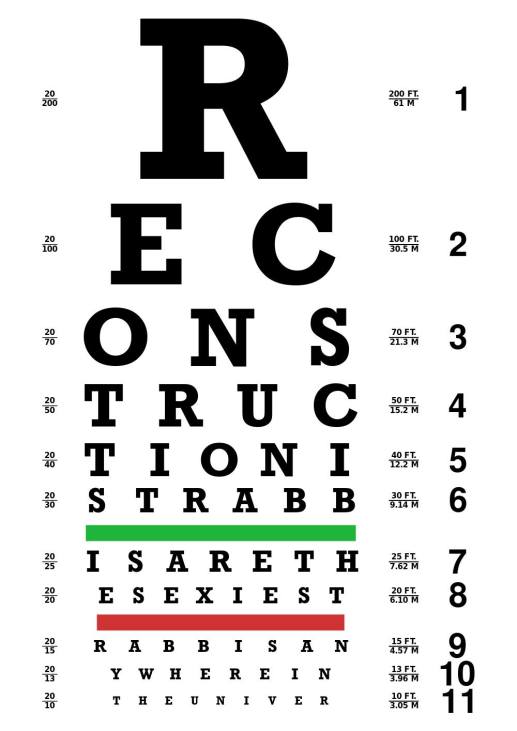 Harris did not return our calls.

Can’t say it any better than Gretchen Kelly 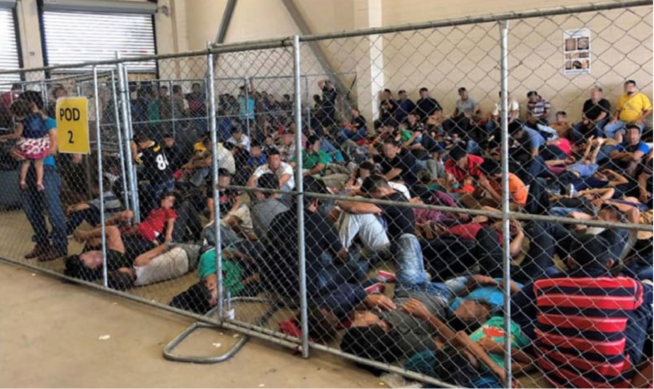 Will they hear the fireworks?

The children, shivering under a mylar blanket in a cold cell. Will they hear them?

This is America. We are in a place, right now, where we can’t say that our darkest days are in our past.

And it feels sick. It feels shocking. Unbelievable.

But it’s real. Our country is no stranger to hurting innocent people.

We are a nation of contradictions. We are fighters. A nation of liberators and emancipators. But we are also a nation that is soft-bellied and apathetic, practiced at not seeing the things we don’t want to see. Life can look perfect if we ignore what’s happening just outside of our peripheral vision.

Keep your head down. Sip your cold beer. Check the mail. Nod at your neighbor. Smile. Everything is fiiiiiiine. Indifference is one helluva drug.

We are one part Gilead, one part Stepford. The contrast is startling…