Before I read The Little Drummer Girl, I saw the movie – probably 25 years ago when I was in my very early 20s. During my 40s (I’m 46 presently), I’ve taught a course called “Israelis & Palestinians” through the Judaic Studies Department at the U of Oregon, and as part of my development of the course I watched the movie again. I think a lot of the 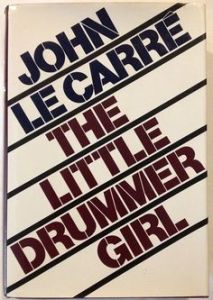 critics wrote that they thought Diane Keaton was not young-enough looking to plausibly play Charlie, the main character. If memory serves, Keaton was a driving force behind getting the film produced, with her playing Charlie, for which I can only say kol ha-kavod (Hebrew which roughly translates to “hats off” to her).

I’m not an expert on the Israeli-Palestinian conflict, and I don’t think I’m able to judge how to describe my level of knowledge and understanding, but I guess I’m willing to say that I’m well-read on the subject and that I have a lot of interpersonal experience with Israelis, Palestinians, and other stakeholders, as well as a lot of time spent in Israel and in the Palestinian Territories. I am basically a J Street person in my politics, FWIW, and I’m sure those lenses color how I see things, but I happen to believe that everyone has lenses of some kind through which they approach this topic.

I think the movie still holds up today, even though I agree that Keaton doesn’t quite look the part, though I am still drawn deeply in by the intensity of her performance, and frankly I’m willing to disregard the issue given that the movie industry frequently presents viewers with men playing much younger characters (Tom Cruise is 53, for example, but the bad-ass spy he plays in the latest Mission Impossible movie is supposed to be younger.)

Actually, I think the movie more than holds up. I think it illuminates the deeply compromised morality of both the Israeli government and the PLO during the Cold War, and it does a rarely equaled job of depicting the two core narratives that define the conflict for Israelis and Palestinians, respectively. The plot never stops moving, the twists are unpredictable, and the underbellies of both sides’ fighting strategies are uncomfortably exposed repeatedly. Along with Steven Spielberg’s Munich (2005) and Eytan Fox’s Walk on Water (2004), TLDG is a film that successfully exposes and explores the moral and human costs of how both sides fight, and, like these other two films, it also leaves the viewer with many agonizing and perplexing questions.

* * *
One of the things I love about this movie and book is the way we as the audience get to see – through Charlie’s eyes – the covert warriors on both sides in their naked humanity, including the ways in which they’ve come to integrate and justify cruelty into their daily work.

Norman Lear, in commenting on the hugely popular TV shows he helped create in the 70s, especially All in the Family and The Jeffersons said, was once asked about how he came to develop shows in which characters of different racial, gender, and other social statuses interacted in ways that were funny, revealing of structural inequities in society, and at the same time quirky enough to come across as distinct individuals. He answered: “We are all versions of each other.”

The Little Drummer Girl is a story that seems to take Lear’s words as a foundational law of the universe, a fate that can’t be escaped by anyone. And so it constantly presents its main characters as actors performing roles, to the point that neither Charlie nor Gadi seem to be able to disentangle their “real” selves from the roles they’re playing. Drummer Girl uses clothing towards this effect too. Early on, when Charlie first meets the Israeli spy, Gadi, she doesn’t know his name, and he refuses to give her one. So she calls him Joseph, like the biblical youth with the coat of many colors who then goes on to live a life full of costume changes as he rises to be the grand vizier of Egypt.

Who is Joseph, Genesis asks us? He is a Hebrew, but is he not also the Egyptian high official who implements a famine-prevention plan that works? Is he the slave who interprets dreams from a prison cell? Is he the spoiled Hebrew kid, the apple of his aged father’s eye, who flaunts his coat of many colors in his older brothers’ faces? Is he the agent of manipulation and retribution against his brothers, the dispenser of forgiveness and reconciliation, or both? What is it with the Hebrew Bible and this theme of Hebrew heroes who are simultaneously identified as and seen as Egyptians? (After all, Joseph is kind of a warm-up for Moses playing that double role, ins’t he?) There’s something foundational in the mythic bedrock of the Jewish story that includes heroes not just playing the role of the nationality of their oppressors, but actually having been given the part on life’s stage – until fate causes the suspended dual-identity to collapse and the player has to choose. Eventually, Joseph can’t stand withholding his identity from his brothers and he bursts into tears and out of his Egyptian persona. And Moses’ Hebrew identity catches up with him as well.

But Drummer Girl doesn’t let its two central characters, Charlie and Gadi, fully collapse the duality of consciousness and identity they go into. We really are all versions of each other. The cruelty we inflict on our enemies really is inflicted on ourselves.

One of the things I respect hugely as a fan of Le Carre’s skill as a novelist is the way he weaves this way of understanding humans as all being versions of one another through many different elements of the story. In addition to national and religious identity, he does it with gender identity as well. It’s no accident that one of the first things Gadi says to Charlie, after she introduces herself, is “I thought Charlie was a boy’s name.” There’s even gender-bending in the title of the novel, which is an unexpected reversal of the famous Christmas carol, “The Little Drummer Boy.”

Who’s acting and who’s being the audience?

Another thing I find amazing is the way TLDG presents scene after scene in which someone is acting and someone is being an audience, though the people serving as audience don’t always know that they are being performed to. Charlie appears, early in the story, on an actual stage in a playhouse, playing to an actual audience in the role of Saint Joan. But then the acting starts happening right and left, without end.

It starts with Marty Kurtz, who heads the Israeli secret agent team, and “Joseph,” the Israeli spy pretending to be “Michel,” a Palestinian terrorist, attending Charlie’s theatrical performance. And after the show, Joseph, pretending to be Michel, sends flowers and a note backstage for her. Marty is pretending to be the owner of a company, Apollo Wine, looking for an actress to represent the company in a TV commercial. He comes to the play with Charlie’s agent, and then he visits her after the play in her dressing room to offer her a job shooting the commercial. She’s the actress receiving fans of her work who are actually performing roles for her.

The art of double entendre

Drummer Girl is full of dialogue with double entendres.